Over the weekend, me and a couple friends ended up in Centralia, PA. That's the nearly abandoned Pennsylvania town with a coal mine fire that's been burning under it for 50 years.

My last visit was about five years ago and a lot has changed. The majority of the buildings have been demolished - only a few remain (some still being lived in). And the warnings signs posted at each end of the blocked off portion of the highway are no longer there. 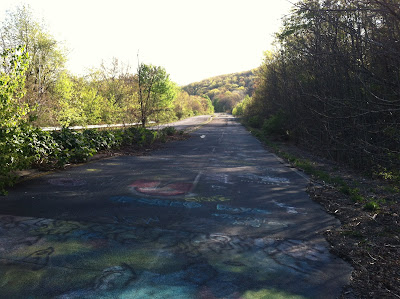 Charles, Anna, and I started by walking the entire length of the abandoned highway (about 3/4 of a mile or so). It's easy to find - Route 61 suddenly makes a sharp jog around a giant mound of dirt which blocks its original path.

The biggest damage to the road is at the midway point of the abandoned highway. The road itself wasn't hot. One of my original concerns was that the soles of my sneakers would become gooey walking down this. Maybe those days are over (at least for this portion of the town). 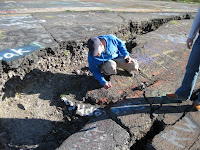 There's one spot where you can see the steam coming out of the road. If you put your hand down into the hole a bit, you can definitely feel the heat from below. And it's super hot. But we couldn't get any of the pictures that actually show the steam.

Here's where we're heading back to the town side of the road. Not too far from there (on the town side), is a sign pleading with the Governor to stop spending money trying to evict the town's few remaining residents. 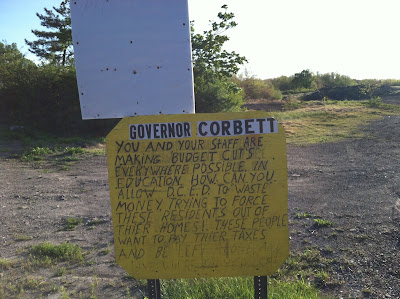 A former resident of the town just happened to be visiting the area as I was getting ready to leave and told me all that dirt behind the sign was just put there last week. Before that dirt was put down, steam was coming out of the ground all over the place there. Here's the area just behind the sign and to the left where he was talking about.

Going up that road a bit beyond the sign is another mound of dirt. Me and my friends had just driven by that originally, but I took a peek over it as I was leaving and saw a dirt field where steam was coming out of the ground everywhere. Again, you can't really see any of it in the pictures I took unfortunately and I didn't want to walk through the area to get any closer. It's one thing to be adventurous, another to be stupid and fall into a sinkhole or something.

If you happen to drive by the area someday, it's worth a look. You can still see all the roads leading through the town's neighborhoods, but there's nothing else there (most of the houses and buildings are gone). There's also a few handmade things around the town, like a sign saying what the name of one of the roads used to be. And some residents still bring little Centralia remembrance crafts they've made to place in spots special to them.

Just be careful if you go and let me know what you think if you do!
Posted by John Anthony at 11:51 AM